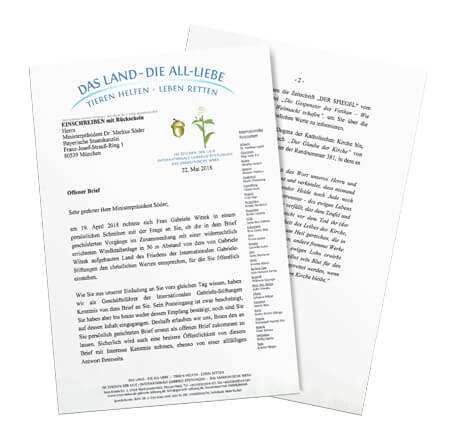 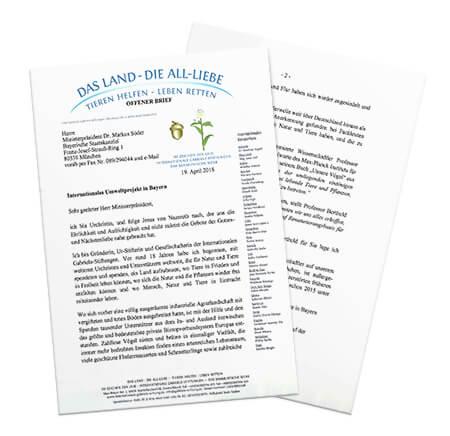 No answer came from either letter. But no answer is also an answer. Perhaps you have an answer for Minister President Söder?

After the Administrative Court of Würzburg rescinded in May 2015 the unlawfully granted permit for the wind turbine located directly on the border of the land of the International Gabriele Foundations, and the Bavarian Administrative Court rejected the operator’s application for an appeal in October 2015, (details are at the bottom of this page), the wind turbine is still standing without a permit and has not been dismantled despite its illegality. We want this illegal construction to be finally removed.

Meanwhile, we have learned that there are even attempts to again grant a permit for this illegal wind generator and put it into operation, before the legality of this permit renewal can be reviewed by independent courts. This renewal is supposed to be granted now, when particularly many birds and bats are flying and would thus be threatened with death by the operating wind turbine.

This Must Not Happen!

We would like to again ask all the friends of the International Gabriele Foundations to support us with their signature, so that this wind power generator is finally torn down and no new permit is granted.

You will find more information on the signature campaign, as well as the possibility to download signature lists, and/or directly give your signature online under our link: Signature Page.

Thank you in advance for your support,

For more information, you will find (in German) the text of the verdict rendered by the Administrative Court of Würzburg on their press page.